The boundaries between worlds have drawn perilously thin…

Arkham Horror: The Card Game is a cooperative Living Card Game® set amid a backdrop of Lovecraftian horror. As the Ancient Ones seek entry to our world, one to two investigators (or up to four with two Core Sets) work to unravel arcane mysteries and conspiracies.

Their efforts determine not only the course of your game, but carry forward throughout whole campaigns, challenging them to overcome their personal demons even as Arkham Horror: The Card Game blurs the distinction between the card game and roleplaying experiences.

In Arkham Horror: The Card Game, you become one of the unlikely group of investigators living and working in or near the quiet New England town of Arkham. You might assume the persona of Federal Agent Roland Banks, or you might slip into the role of street urchin Wendy Adams. 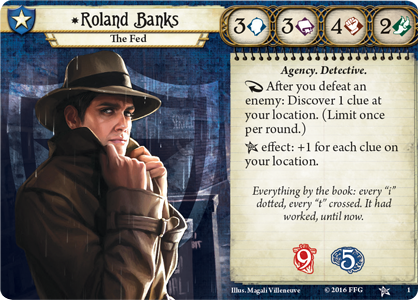 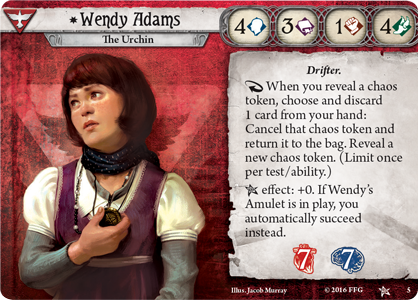 Regardless of which investigator you become, you’ll begin play with a number of different strengths and weaknesses. Some of these are indicated by your double-sided investigator card. Others are built into your deck.

This is because, as with Wendy Adams (Core Set, 5), each investigator comes with deckbuilding requirements that include two character-specific cards and a weakness. In Wendy’s case, this means her deck will always include Wendy’s Amulet (Core Set, 14) and Abandoned and Alone (Core Set, 15), as well as a basic weakness—possibly Amnesia (Core Set, 96) or Paranoia (Core Set, 97). 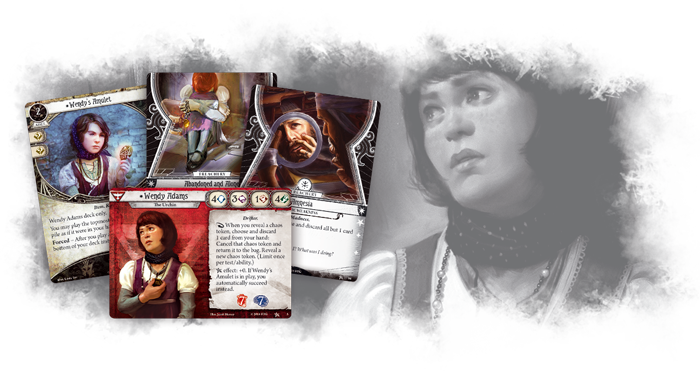 You’ll have a good measure of freedom in the design of the rest of the deck. You can load it with different gear you might equip, allies that you’d like to accompany you, spells you might cast, weapons to help you battle the strange monsters you encounter, talents you can develop, and events that might grant you valuable momentary advantages. However, no matter which cards you build into your deck, you’ll have to remain cognisant of your physical limitations.

Even if you’re fighting monsters that defy explanation, you’re still only human. That means you’ve only got one neck, one body, and two hands. It also means that your mind can only withstand so much strain before you go mad. Accordingly, in Arkham LCG, your investigator can only equip a limited number of items. And you’ll count yourself lucky to find even one ally bold enough to accompany you along the way. 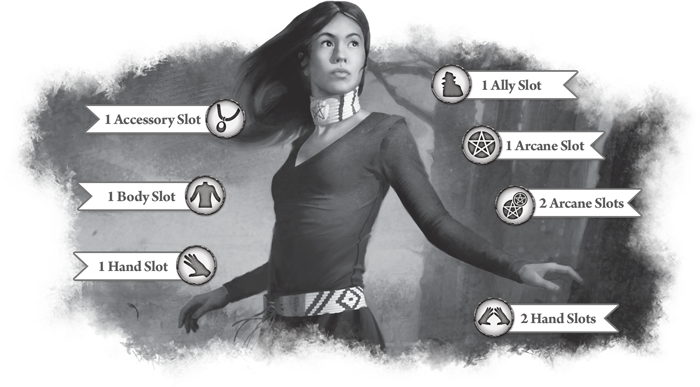 For all the freedom you gain in building your deck, however, the greatest freedom you gain as an investigator in Arkham LCG is the ability to steer your investigation in whichever direction you wish. Do you want to scour a room for signs of the occult? You can. Do you want to leave the room and explore another location? You can. Would you prefer to load your weapon in case the sounds that you’re hearing are being made by something not fully human? You can.

In Arkham Horror: The Card Game, after you’ve assumed your role as investigator and prepared your deck of resources, you’re ready to embark upon a series of strange and mysterious adventures.

Instead of trying to defeat other players, the goal of Arkham LCG is to successfully unearth the secrets of the Ancient Ones, their minions, their cults, and the unfathomable evils that they’re perpetrating within the streets of Arkham. In order to do this, you must find a way to gather enough clues that you can solve the mystery immediately before you. This is done by exploring locations, discovering the clues they hold, and using those clues to advance the act deck. 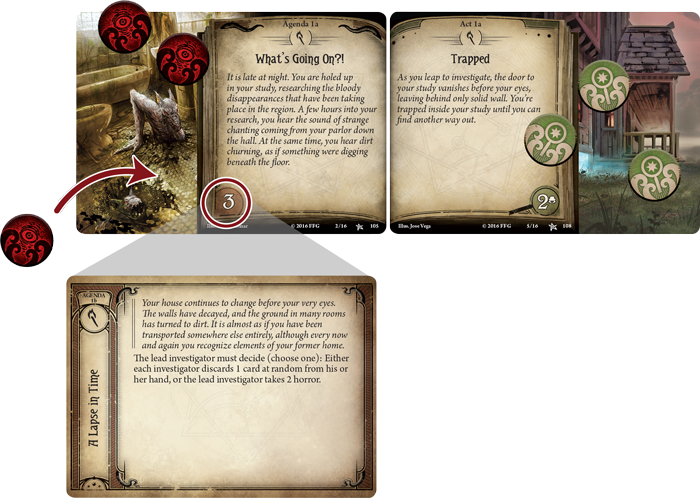 Each round, you’ll place doom upon the active agenda, and discover other cards that will accelerate this impending doom. Should enough doom be placed upon an agenda, the forces of evil will have moved another step along their ultimate design, and should they progress through the agenda deck before you and your friends successfully complete the act deck, you lose.

These forces of evil won’t just be working in the shadows. They’ll confront you at every turn, hoping to defeat you and thwart your efforts. Each adventure comes with rules that help you quickly assemble a custom-tailored Scenario deck that reflects the different enemies, obstacles, hexes, curses, and other treacheries you may face during your investigations. Along with the any rules specific to the adventure, as well as its act and agenda decks, this Scenario deck gives life to the game’s eerie mysteries.

You may overhear Mysterious Chanting (Core Set, 171) echoing through the halls of Miskatonic University. The floorboards may break open beneath you as Grasping Hands (Core Set, 162) reach and flail blindly about, grasping and clawing at your ankles. Or your investigation of a damp cellar may lead you straight into the path of an Icy Ghoul (Core Set, 119). There’s no telling what you may encounter—the range of possibilities is utterly unfathomable. 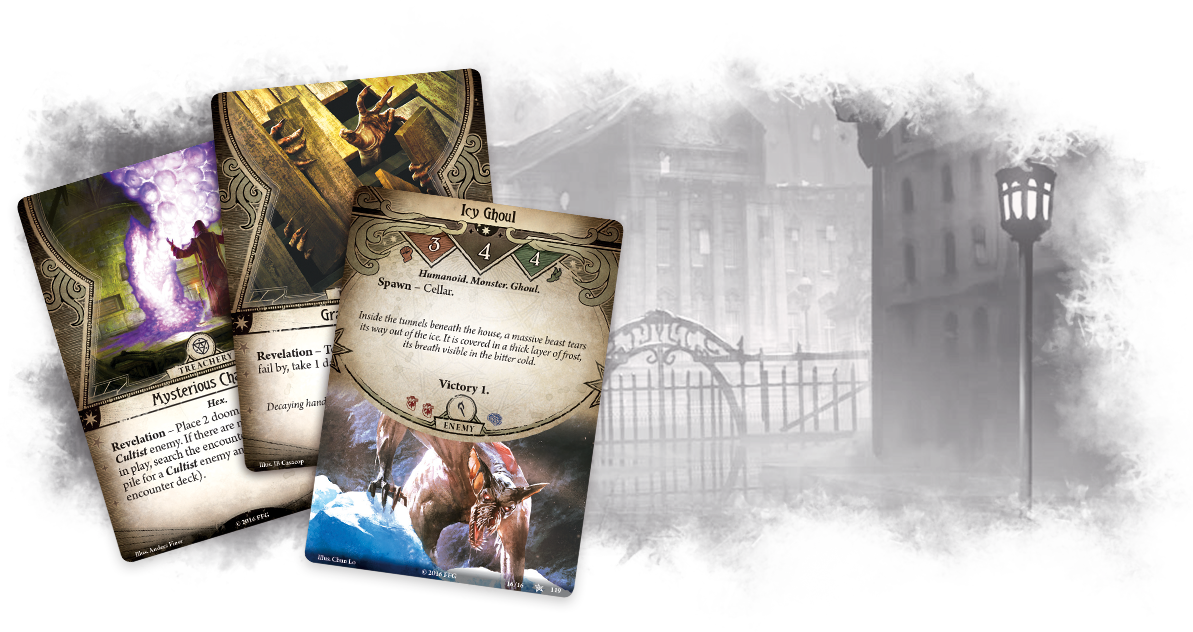 A Gateway to Other Worlds

Beware! Once your eyes have opened to the terrifying realities of our world, you can never unsee what you have seen…

You can, if you wish, play Arkham Horror: The Card Game as a series of standalone adventures, but you may find that your early investigations lead to as many questions as answers. And for those who dare continue, there’s more to your investigation. The game’s adventures are designed as parts of larger campaigns, and the choices that you make in one adventure will have consequences later on in your campaign. You may suffer mental or physical trauma. Your enemies may gain strength. Or you may reduce their number, recruit valuable allies, and gain valuable experience with which you can “level up” your deck.

Some of the game’s cards feature pips beneath their cost that indicate their level. Although you cannot include any of these cards in your deck at the beginning of a campaign, you can use the experience you earn from your adventures to add them to your deck, swapping them in for other cards. 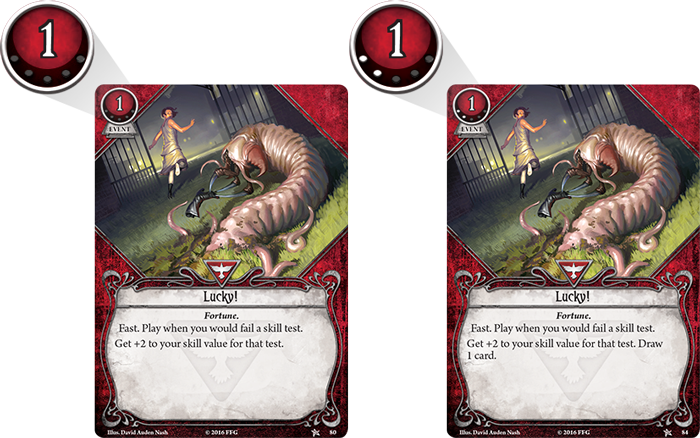 These alterations in your deck mirror the sense of character advancement familiar to most roleplaying games and helps to prepare you for the greater challenges you’re likely to face as you move further along and draw nearer the heart of your campaign’s mysteries.

Finally, as a Living Card Game®, Arkham Horror: The Card Game allows you to explore realms far beyond the confines of the Core Set and its campaign. Deluxe Expansions and Mythos Packs introduce new adventures, new campaigns, new player cards, and even new investigators. 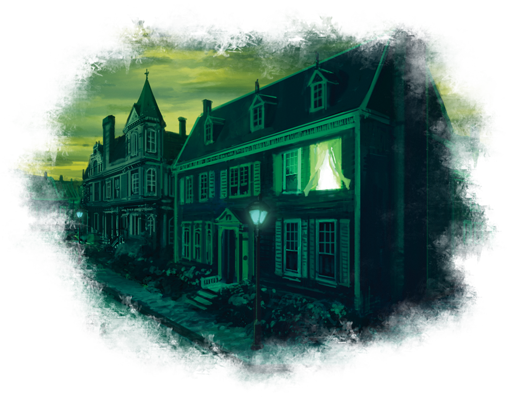 Steel your nerves, arm yourself, and be sure to consult your most arcane tomes. The boundaries that guard our world from the other realms of existence are growing thin, and all manner of strange and eerie adventures await you in Arkham Horror: The Card Game!